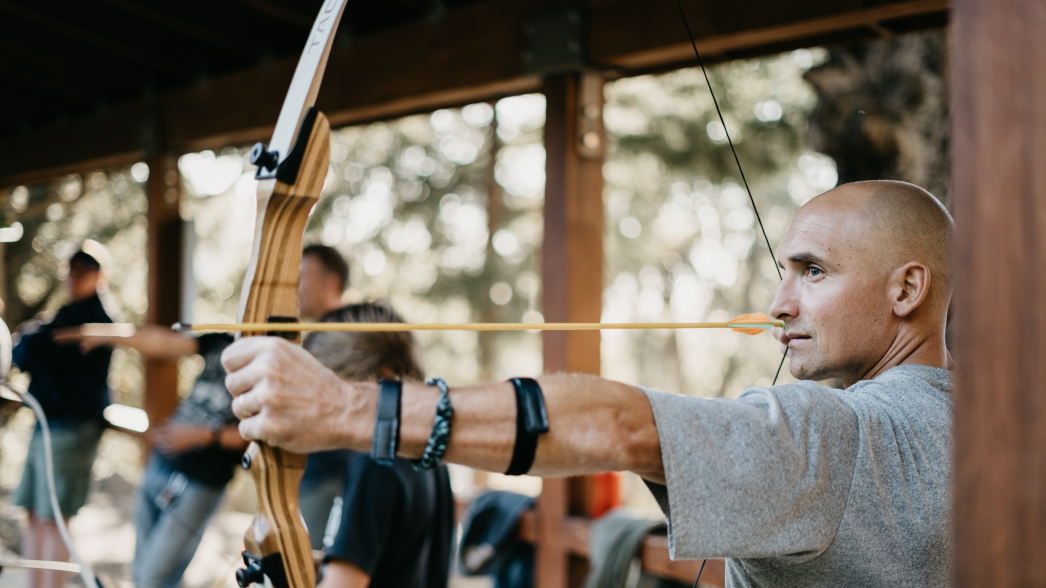 When you pick up a bow and arrow to shoot, you’ve become part of a legacy that’s so powerful and long lasting there are star constellations based on ancient archer gods and goddesses! It’s an exciting sport that still provides both recreational and professional satisfaction.

However, archery is nowhere near as easy as it looks. To do it well as a beginner is to pay attention to the precision and correct form you need to display. It comes down to four key areas: the bow itself, your stance while holding the bow, loading the bow with arrows, and shooting arrows.

We’ll go through each of these areas and provide you, as a beginning archer, with excellent tips that you need to know to make the most of your first archery sessions.

So, let us go over some archery tips for beginners.

Very few beginners start out with the traditional long bows that you see in Medieval-era movies. You will more likely begin with a recurve bow, which has an “S” shaped curve at both ends, or with a compound bow that contains wheels at both ends of the bow limbs.

Those wheels are part of a pulley system of cables and strings that work together to decrease your resistance as you draw back the bow. That enables you to hold the arrow taut and pulled for a longer period. Recurve bows are typically used for target practice and compound bows are popular for hunting.

The number one tip for your bow is to choose one that’s best for your dominant eye and dominant hand. You can choose either a left- or right-handed bow. And if you are a woman, pick a bow that are made for women!, it just make more sense an the results will be better.

The second tip for your bow is to make sure the draw weight range is one which you are comfortable with. A draw weight that’s too high will quickly fatigue you. Your draw weight is dependent on your body type and weight.

In general, people who are larger and heavier framed can look for a draw weight between 50 and 65 pounds. A smaller body type will need a lesser draw weight. Each bow has its own weight range, so stay with those guidelines.

The third tip is to measure your arm span, for your proper draw length. Hold your arms out and measure from one middle finger tip to the other. Divide that number by 2.5 to get your draw length, in inches, for your body. For this measurement, it’s better to choose less than more.

Your Stance While Holding the Bow

Just like with ballet or golf, proper body position is paramount to becoming a successful archer. Your toes should be at a perfect 90-degree angle to the position of the bullseye target. Stand completely sideways, with erect posture: your shoulders straight, your spine aligned, and your feet planted firmly and stably on the ground.

You don’t lean or change your body position in any way. You turn your head towards the target, and you move your bow and arrow into position.

Make sure your shoulders are also relaxed. Only your arms are used to manipulate the bow and arrow; no other body part is involved.

The whole stance requires a minimum amount of body movement. It’s surprisingly efficient and elegant, and the same stance has been used for hundreds of years.

Load the Bow with an Arrow

Now that you know how to stand, it’s time to learn how to identify and properly load your bow with an arrow. As you look at the back end of the arrow, you’ll notice three faux ‘feathers,’ which are called fletchings. These used to be real feathers but are now made of manmade materials.

There are three fletchings on each arrow. One will be differently colored than the other two. That’s the one that should be facing towards you as you shoot it. You’ll also see a split at the back of the arrow, which is called the nock.

To load your bow, grip the bow in your non-dominant hand. Place the arrow nock on the bow string and position it until you hear it click into place. Hold the bow steady towards the target and draw the arrow back with your dominant hand until the tip is resting on the arrow rest.

Draw the arrow back and position three fingers around the string below the arrow’s placement against the bowstring. Your elbow will be quite high and the arrow’s fletchings will be in line with your ear. This is so you can perfectly see down the arrow’s shaft toward your target.

As you are standing with your hand drawn back, try to keep your body perfectly still and focused on the target. Archery requires very little body movement; it’s more about how steadily you’re able to hold the bowstring back and keep the arrow perfectly straight and pointed towards the target.

For shooting, simply relax your hand enough for the arrow to release and shoot toward the target. You don’t need to do anything with the grip hand. Don’t bring the bow down until the arrow has hit the target.

One common mistake when shooting is to create too much body movement. You want your drawback hand to be the only thing that moves. Try to keep the bow steadily facing towards the target, and don’t move the bow when shooting. If you watch professional archers, they stand perfectly still when shooting.

The best tip for a beginning archer is to practice. It takes time, dedication, and focus to keep the proper stance while holding the bow, position the arrow correctly, drawback and hold it steadily, then finally let go. It also takes patience as well.

It’s tempting to want to behave like an archer in the movies or a modern-day Robin Hood and shoot one arrow quickly after another. But that’s done for effect. Proper archery involves the time needed to set up properly and prepare your bow and arrow properly.

So, with these tips, you’ll be well on your way towards hitting that bullseye.

Previous Post: How to Restring a Compound Bow The Easy Way

Next Post: What is the Brace Height on a Compound Bow?